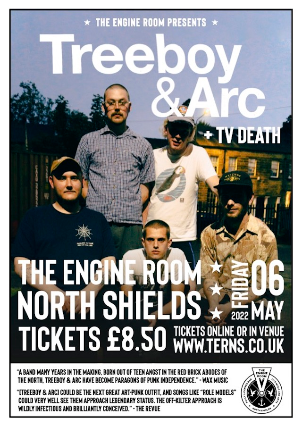 Treeboy & Arc + TV Death
Treeboy & Arc have found their niche - creating pop songs that integrate relentless repetitive rhythms, and left-field, almost robotic sounding synthesisers - with a Kraut-Rock inspired rhythm section, melodic guitars andnoisy abrasive synths thrown in. Their shifting sound fluctuates through each process-led playlist and who doesn’t love fluxus?Treeboy & Arc have received praise from BBC 6 music, BBC Radio 1, So Young Magazine, DIY Mag & CLASH, to name a few. Alongside this, they’ve shared stages with the likes of Parquet Courts, Shame, Ulrika Spacek, Rolling Blackouts Coastal Fever, whilst touring as support with other UK acts Crows & LIFE.Their debut EP ‘Life Preserver’ rapidly sold out on release in 2021.Now, their focus is fully on the recording of their debut album, back in their dodgy basement, an endeavour they started in 2018, and are now perfecting in their own brilliantly imperfect way for release later this year.

What the music press think:-

“...It’s the sound of a band simultaneously treading new ground and never having looked more sure of themselves.” – DIY Magazine“[Treeboy & Arc] could be the next great art-punk outfit, and songs like “Role Models” could very well see them approach legendary status. The off-kilter approach is wildly infectious and brilliantly conceived.” - The Revue“Treeboy & Arc continue to prove themselves to be a leading light out of the north” – So Young“A band many years in the making, born out of teen angst in the red brick abodes of the North, Treeboy & Arc have become paragons of punk independence.” - Wax Music

After some odd and inconvenient cross-pollination with bands of a similar name, the former Radio Silence; are now the newly branded TV Death - transmitting their potent brand of psychedelic garage rock. 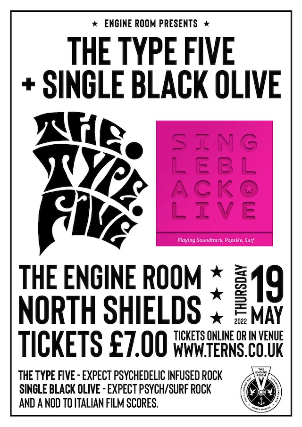 The Type Five + Single Black Olive
Two very interesting bands from right on our own doorstep on the north east coast; forging psych/rock/alt/pop/prog - seriously, there is so much to offer within this.

Seriously, not to be missed for the discerning ear for interesting live music. 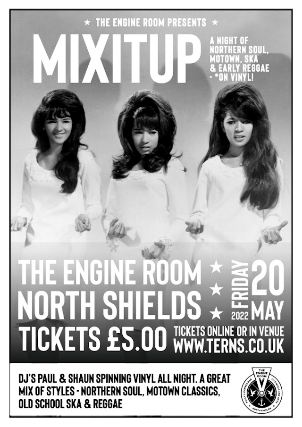 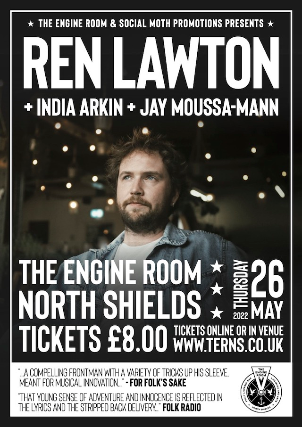 Ren Lawton & Special Guests
Multi-instrumentalist Ren Lawton has had a diverse, often tumultuous, career in the music world. Originally performing under his own name, Conor Owen, he experienced the highs of supporting the likes of We Are Scientists and The Subways

.With a notable ability to play a varied section of instruments - from guitars and trumpet to harmonica and piano - Ren Lawton was a project that would transform Conor’s style of music. He was able to create mature vignettes inspired by the great storytellers from music and beyond such as Bob Dylan and Frank O‘Connor. The result is debut album, Today Today Tomorrow; a collection of songs, emotive and personal.

Conor’s atmospheric brand of contemporary folk has resonated far and wide. With over 1 million Spotify streams of single ‘Piece of Your Heart’ as well as airplay on Tom Robinson (BBC Radio 6), BBC Wales, BBC Newcastle and BBC Bristol. He has also picked up press support from tastemakers such as Clash Magazine, Folk Radio, Thank Folk For That, For Folk’s Sake, Americana UK, Narc, Fame Magazine, Contact Music and many more.
GBP8.00 | More Info 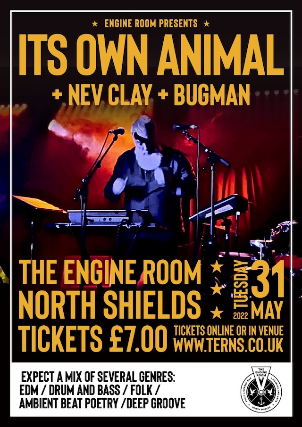 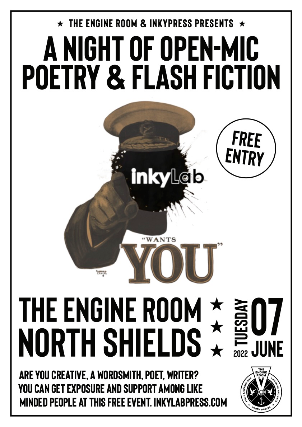 The Engine Room presents
A Night of Open-Mic Poetry & Flash Fiction FREE
FREE event
Are you creative, a wordsmith, poet, writer? You can get exposure and support among like minded people at this Free event at our place on Tues June 7th; FREE ENTRY - with InkyLab - https://www.inkylabpress.com
ZERO Buy Tickets | More Info 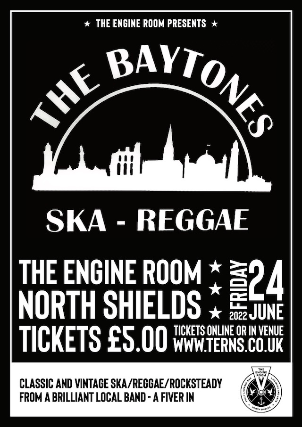 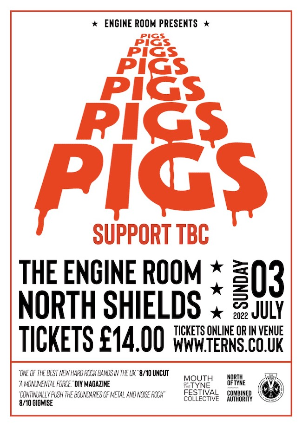 "There's maybe a thrash influence rearing its head elsewhere and some accessible growl-along choruses here and there. The crucial thing, however, is that the riffs are still heavier than Ray Winstone after a slap-up black pudding breakfast." - The Quietus (No55) : https://thequietus.com/articles/28423-quietus-albums-of-the-year-so-far-2020
GBP14.00 Sold Out | More Info 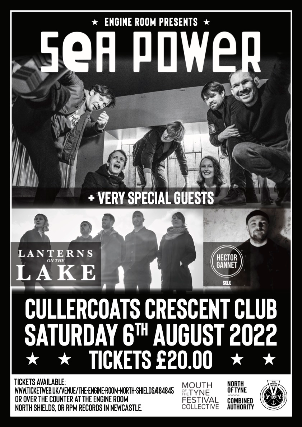 This event marks a collaboration between The Engine Room, North Shields and Cullercoats Crescent Club working with The Mouth of The Tyne Festival Collective.

SEA POWER: "With new album Everything Was Forever crashing in as a genuine chart-bound sound – number four in the UK – Sea Power are greatly looking forward to loading up the jamwagon and playing once more to the most motivational audience in all of modern music." - https://seapowerband.com

LANTERNS ON THE LAKE: Re their Mercury nominated album Spook The Herd - 'Startling' MOJO - 'A fitting record of our times' LINE OF BEST FIT - 'A truly ambitious work of art' NARC - https://www.lanternsonthelake.com

HECTOR GANNET: 'A fucking great songwriter' SAM FENDER - “From first hearing, it has been clear to me that Hector Gannet are a band of exceptional
Talent” – Tom Robinson BBC 6music - https://hectorgannet.com
GBP20.00 Sold Out | More Info 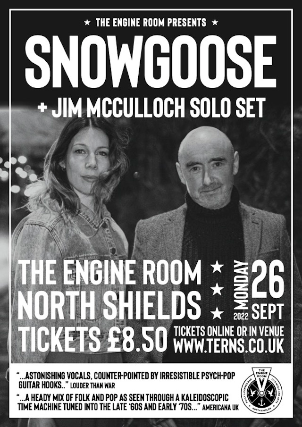 Snowgoose + Jim McCulloch solo set
Tracing a line through ‘60s West Coast psychedelia and early ‘70s folk-rock, Anglo-Scottish duo Snowgoose effortlessly transcend their influences. While their debut ‘Harmony Springs’ was largely written by guitarist Jim McCulloch (Soup Dragons, Isobel Campbell & Mark Lanegan), their 2020 release ‘The Making of You’ sees vocalist Anna Sheard step forward as a lyricist and melodist. The result of this collaboration between the pair is a sonic landscape of rare beauty, one moment intimate, the next utterly exuberant.

“The Making of You sees old Soup Dragon Jim McCulloch, plus other Glasgow indie glitterati from Teenage Fanclub and Belle and Sebastian, doing a Pentangle. The occasional bossa nova flourishes are lovely, as is the easy-on-the-ear Anna Sheard.” The Guardian Its Own Animal + Nev Clay + Bugman